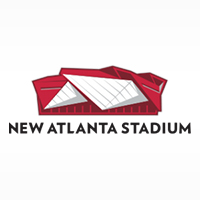 History was made tonight when the Atlanta Falcons together with representatives from the NFL, Major League Soccer, the City and State broke ground on the new Atlanta stadium set to open in 2017. The new $1.2 billion multi-purpose stadium will be a state-of-the-art, iconic sports and entertainment complex designed to attract world-class sports, civic, cultural, and commercial events and serve as a landmark for the city of Atlanta.

“Today is truly a celebration not only for the Falcons and the new Major League Soccer team that will call this stadium home, but for the City of Atlanta, the State of Georgia and all of our partners who have worked so hard to make this project a reality,” said Arthur Blank. “We are committed to providing our fans and event guests with an unparalleled experience in the new facility, and we’re equally committed to the long-term economic growth and success of this great city and state.”

NFL Commissioner Goodell echoed Blank’s sentiments: “What began today with a shovel in the ground will end with a futuristic, state-of-the-art stadium that will put Atlanta at the forefront of cities with large, multi-use facilities. A project like this can only be created through a strong public-private partnership. We congratulate Arthur Blank, Mayor Reed, Governor Deal and other local and state leaders on the community spirit that has resulted in an extraordinary accomplishment.”

The 1,800,000 square foot stadium, designed by leading design firm 360 Architecture, will accommodate seating for 71,000 and will feature a first-of- its-kind retractable roof configuration and an open air concourse. The innovative, versatile and technologically advanced facility will be truly iconic, showcasing other unique elements including a 60-foot high, 360-degree video board, a floor to ceiling window with views of the downtown Atlanta landscape, and exterior accent lighting reflecting the event color scheme. Also essential in its planning, the new stadium will represent the highest standards in environmental responsibility and will incorporate the latest in sustainable and LEED advancements in design, construction and operations.

“Today we are breaking ground for one of our city’s next iconic landmarks in the heart of downtown Atlanta,” said Mayor Kasim Reed. “The new stadium will create jobs, enable us to compete for world-class sports events and draw even more visitors to support our city’s $13 billion convention and tourism industry.

“Atlanta is a city of dreamers and doers. And once built, this state-of-the-art retractable-roof stadium will provide a fan experience worthy of one of America’s leading cities. I offer my personal thanks to Arthur Blank and the Atlanta Falcons organization for believing in Atlanta. I am confident that the best is yet to come.”

To accommodate Atlanta’s newly awarded Major League Soccer franchise, the stadium will reconfigure to soccer requirements, a feature that will make it a significant draw for major soccer tournaments including the FIFA World Cup.

“We believe the new Atlanta stadium will be one of the most spectacular venues in the world,” said MLS Commissioner Don Garber. “It will provide an incredibly innovative approach that will customize the stadium for Atlanta’s new Major League Soccer team, and it will also be an iconic host for major international matches and future international tournaments.”

The collective vision for the new stadium was two-fold: create an iconic, multi-use complex that will attract marquee events and contribute to a growing downtown tourist and entertainment district, and utilize the project to serve as a catalyst for lasting, positive change in the Westside communities surrounding the site. The new stadium project is expected to be the largest construction project and jobs creator in Atlanta over the next several years.

The Falcons and The Arthur M. Blank Family Foundation have a long history of working with non-profit organizations in the Vine City and English Avenue neighborhoods. Along with a $15 million commitment from Invest Atlanta, The Blank Foundation has committed $15 million to transformational projects that will benefit Westside residents. Blank and City officials aim to leverage these funds to attract more investments into the community.

“We’re proud to announce the launch of Westside Works, a long-term neighborhood improvement program focused on creating employment opportunities and job training for residents of Westside communities,“ Blank said. “Together with CEFGA and Integrity CDC, we’ve committed to placing at least 100 men and women into construction jobs either at the stadium or in the surrounding areas over the next 12 months. And that’s just the beginning; there is much more work to be done in the coming years.”

The success of the new stadium project is a result of the collective “can do” attitude of numerous business and civic leaders and the significant contributions made by the Falcons, the city and the state.

“The new stadium will assure that Atlanta remains a premier sports destination for many years to come,” said Governor Nathan Deal, “Once complete, this stadium will provide the Falcons with an amazing new roost, serve as a huge draw for fans of our annual sporting events and attract new business opportunities for this campus. Georgians are gaining a state-of-the-art venue for entertainment that will deliver a significant economic impact to the city and region.”