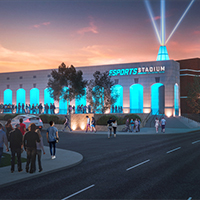 The City of Arlington is excited to announce plans for a state-of-the-art esports stadium designed to draw competitive players and fans from around the world.

The 100,000-square-foot space, which would be the largest and most flexible esports stadium in the country, is set to open its doors this fall in Arlington’s world-class Entertainment District.

By collaborating with award-winning sports and entertainment architecture firm Populous, the City of Arlington and Esports Venues, LLC, plans to invest $10 million into the Arlington Convention Center to transform it into a stadium that offers the most immersive spectator experience in the live esports event market.

The stadium will be managed by NGAGE Esports, one of the nation’s leaders in the field of entertainment marketing. NGAGE has a proven track record of working with some of the world’s biggest companies to combine social media, design, asset building, brand partnerships and activations to optimize fan engagement.